When it comes to mixing music with art, this combination is definitely not new to Bay area artist, painter, and animator, Arik Ehle, also known as Wild West Side. Arik has been working full time at Pixar Animation Studios for the last 15 years and on the side, he makes beautiful sculptures and taxidermy. One of our favorites is a piece called “Springbok Rock” which features a gazelle vibing out with SOL Republic headphones.

In celebration of #StarWarsDay, Wild West Side is giving away one of his “Rebel Trooper” sculptures on Instagram.

To enter, comment on @SOLREPUBLIC’s Instagram photo of the Rebel Trooper helmet with #SOLRebelTrooperContest, mentioning @SOLREPUBLIC + @WildWestSide and tag a friend! One lucky winner will be randomly selected by 12AM EST on May 9th and will receive the custom vinyl stormtrooper helmet pictured above with 59Fifty hat & SOL REPUBLIC Tracks (v8) headphones (a $225 value). View Contest Rules here.

UPDATE 4/9/16: The contest has ended. Congrats to the winner @coolguy_hess

Now on to the interview with Wild West Side as we learn about his inspiration behind his art and how he was featured by the official Star Wars Instagram page.

What are you currently working on?

2015 ended up being a really busy year, with a two person show in Oakland and a solo show in San Francisco. 2016 started off a little slower, which was nice, but it’s really starting to pick up lately. I had a lot of fun taking part in a Steampunk themed show this past January in Burbank, and I’m working on a new original piece for an international group show in Australia this August. Besides that, I’ve been working on a new limited edition series of smaller designer toy sculptures, and some custom vinyl pieces.

What do you do at Pixar?

I recently was promoted to a new role at Pixar, Lead Animation Artist. I’m a creative liaison between feature film productions and marketing, publishing, consumer products, and interactive. It’s been a fun and exciting change after 15 years in film production. I was previously an Animator, Lead and Crowd Animation Supervisor, with credits on 12 movies.

How did you get introduced to taxidermy, and what as your first piece?

‘Wild WestSide’ is a series of faux taxidermy sculptures with an edgy, urban twist. The pieces blend realism and caricature with a flavor of the Wild West and West Coast lifestyle. Each character exemplifies the juxtaposition of primal struggles in the natural world with that of the human condition.

It all really goes back to when I was little, and I became transfixed with a deer mount that my Grandparents had in their family room. I knew it was obviously real, and had once been alive, but couldn’t shake the fact that it felt completely unnatural and devoid of a soul. From that point on, I thought a lot about what it would be like to make my own taxidermy inspired art, but really focus on creating a character and telling a story.

Years later, I fell in love with some African gazelle horns that my brother-in-law had, so I looked for them online and realized they were from Impalas. When I came across photos of Impalas in the wild, I was taken aback with how beautiful and stunning they looked. Their markings are so bold, and lines so striking. But when thinking about the name, another thing came to mind; the classic car, and more specifically, low rider culture. That planted the idea for my first sculpture, ‘OG Impala’, which celebrates the beauty of the animal while infusing it with a caricatured flavor of the West Coast.

Tell us about the creative process into how you put character and personality into these sculptures?

All of my pieces have a story behind them, and are initially thought of and explored as characters. Sometimes I’ll see a really beautiful animal and it’s markings or the look & feel will inspire an idea that I’ll run with. One of my more recent sculptures evolved from the realization that ‘rockabilly’ and ‘billy goat’ could meld to create an interesting character. From there I try to think a lot about key characteristics that would sell it visually. Other pieces are inspired by emotional subject matter, so in those cases I really think a lot about the emotion that I want to convey, and how that might be shown. By incorporating a lot of the same tools that I use as an Animator, I found that by using caricature, posing, and expression I could create compelling characters. All of my pieces are sculpted, cast, and painted by hand, and are completely faux.

Which came first adding hats as accessories or headphones?

As the first piece neared completion, I was already thinking of what would come next, and that happened to be a gazelle with a swagger who wore a hat. I loved how the cocked hat really sold the character, and it got me thinking a lot more about other accessories that might do the same. That’s when I really started to dig deeper into the character aspect, and the stories behind the characters, and started introducing elements of physiological and emotional subject matter.

Where did you get the inspiration of adding headphones to “Springbok Rock”, which features SOL headphones?

The Springbok is a self portrait of sorts; it epitomizes my belief that listening to music can instantly take you to another place and time. It can fill you with emotion, evoke a forgotten memory, or inspire visions of the future. It fuels my daydreams and sparks creativity. I looked at a lot of different headphones, and quickly realized a key element I wanted was something that really highlighted self expression. I love how customizable the SOL headphones are, and how expressive and bold the bands are. I decided to have a custom pair painted by Colorware, so that it tied in with all the colors and finishes on the rest of the sculpture. 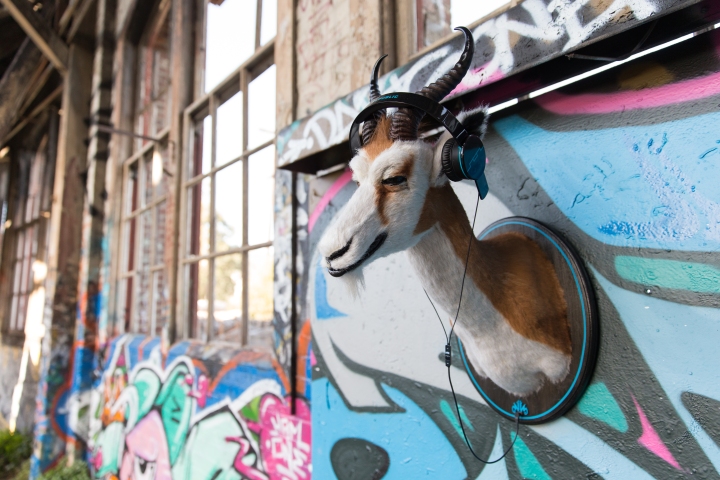 That must mean music is a big part of your life. What do you listen to when you’re making art?

Music is a huge part of my creative process. Since I work on my art outside of my full time job, nights and weekends, having a dedicated space that’s set up and ready to go 24/7 is essential. Whenever I have an hour or two free, I’ve found that if I can turn on the lights in my studio and put on some good music, it really helps me get into a focused and creative mindset. This is especially true on days when I’m tired and don’t feel like I have any creative energy at all. I also let the sculptures personality dictate the type of music I listen to while working, it really helps me get into the style and mood of the character. 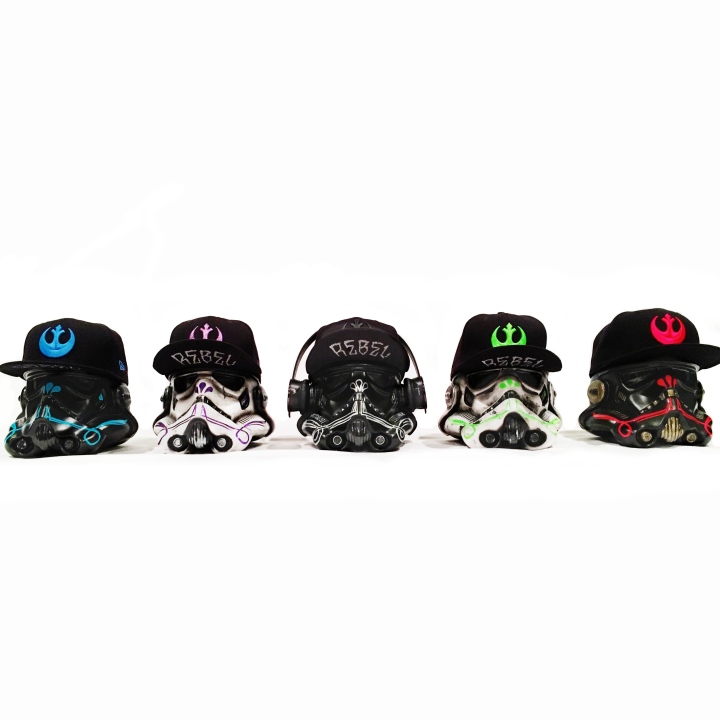 What’s the inspiration behind the Rebel Stormtrooper helmets?

Back in 2014 I participated in a group show put on by Disney and Lucasfilm called ‘Project Legion’. I customized a 6″ vinyl stormtrooper helmet and decided to put on a spin on the traditional character and make him ‘rebellious’. I happened to have an extra mini New Era hat on hand, which I’ve used in previous sculptures, and when I saw that it fit almost perfectly it gave me the inspiration for the whole piece. 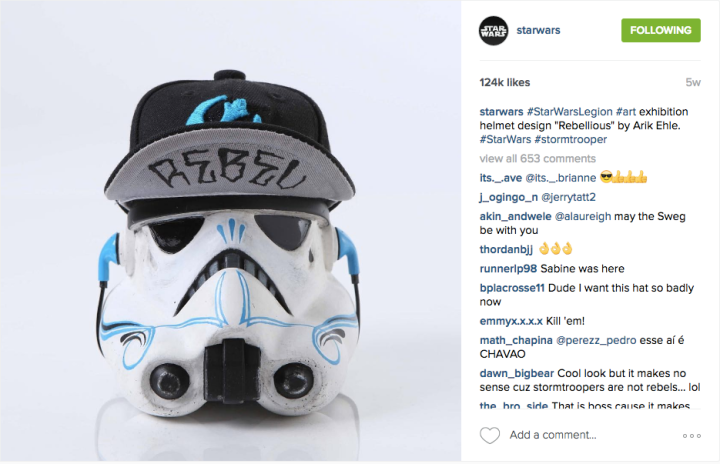 The official Star Wars Instagram recently posted a photo of my ‘Rebellious’ trooper sculpture and it had a great response (over 120,000 likes), so based on requests and interest I decided to do a super limited run of 5 nearly full sized helmets. I’m super stoked to be partnering up with SOL to giveaway the Silver & Black variant.

What’s in store for the future?

I’ve got so many ideas for full and mid size sculptures that I’d love to start working on, but at the moment I’m focusing on launching the next mini resin series based on my ‘Vicious Zebra’ character. 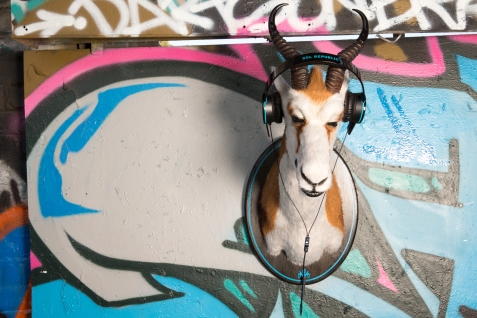 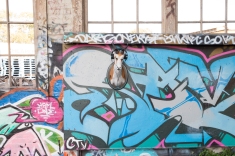 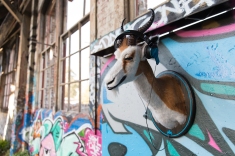 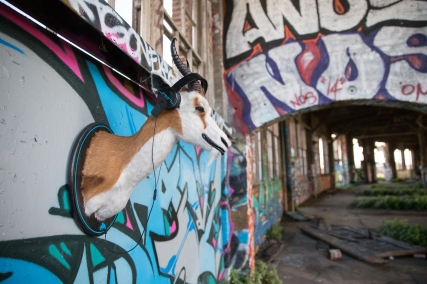 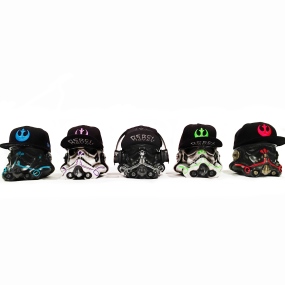 One thought on “Artist Spotlight: Wild West Side”